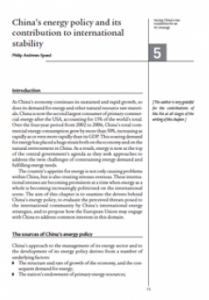 As China’s economy continues its sustained and rapid growth, so does its demand for energy and other natural resource raw materials.  China is now the second largest consumer of primary commercial energy after the USA, accounting for 15% of the world’s total.  Over the four year period from 2002 to 2006, China’s total commercial energy consumption grew by more than 50%, increasing as rapidly as or even more rapidly than its GDP.  This soaring demand for energy has placed a hude strain both on the economy and on the natural environment in China.  As a result energy is now at the top of the central government’s agenda as they seek approaches to address the twin challenges of constraining energy demand and fulfilling energy needs.

The Governance of Energy in China. Transition to a Low-Carbon Economy