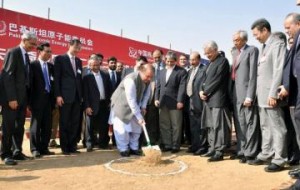 In October 2012 China’s government lifted the moratorium on the construction of new nuclear plants that had been in place since the Fukushima disaster of March 2011. At the same time it adopted a five-year plan for nuclear safety and issued an Energy White Paper which re-affirmed its commitment to nuclear power.  Since the Fukushima disaster, China has launched a number of new research programmes on nuclear safety and has engaged closely with the International Atomic Energy Agency and counterparts in Japan and Korea in order to improve safety management.

China’s renewed commitment to nuclear power arises not just from the growing demand for electricity but also from the urgent need to reduce air pollution. Twenty plants are currently in operation with an aggregate capacity of 17 GW. A further 28 reactors are under construction which will bring the total capacity to about 45 GW by 2018. The target for installed capacity by the year 2020 has been reduced from 80GW to 58 GW, but the long-term target remains at about 150 GW by 2030.

In seeking to list on the Shanghai and Hong Kong stock exchanges, China National Nuclear Power (CNNC) and China General Nuclear Power (CGNPC; formerly China Guangdong Nuclear Power) are following the directive of the new government that state-owned enterprises should diversify their sources of funding and following a trend set much earlier by other Chinese energy companies. The national oil companies launched their international IPOs back in 2000 and 2001. Huaneng Power International was the pioneer in the power sector, listing in New York and Hong Kong in 1994. Such listings generally involve only a small proportion of the companies’ shares. As a result the changes to governance are only modest, but listing can raise significant funds to support capital investment programmes.

As part of its drive to build a larger and safer nuclear power industry, China is following a small number of other countries in supporting research into the application of thorium technology.  Liquid fluoride thorium reactors (LFTR) are a type of thermal breeder reactor in which thorium fuel is bred into uranium-233 using a fluoride fuel salt. This technology was first developed at the Oak Ridge National Laboratory in Tennessee in the 1960s, but was then abandoned by the US government. The proponents of LFTR technology claim that it is safer, generates less waste, is less prone to proliferation and is cheaper than conventional nuclear power technologies. The problem is that the technology is still in the laboratory. China is just one of several countries with public and private sector initiatives to develop LFTR to commerciality, including Japan, the US, the UK, Australia and India. China’s project started in 2011 under the leadership of Jiang Mianheng, son of former President Jiang Zemin, with the objective of developing a reactor within 25 years. In March 2014, the Prime Minister, Li Keqiang, reduced this period to just ten years, such is his concern over air pollution.

Looking overseas, China’s nuclear power companies have joined those from Russia, Japan and Korea in seeking contracts to build plants in other countries. Over the last 15 years the Chinese companies have developed their own reactors, including third generation, based on technologies from France, Russia, Japan and the USA, and are keen to export them. The United Kingdom faces a power crisis as a large proportion of generating capacity is due to be decommissioned over the next few years. Both CNNC and CGNPC have been lined by the UK government to partner EDF of France to build Britain’s first nuclear power plant for 60 years after other companies withdrew on commercial grounds.

Other countries are desperate for additional rather than replacement capacity. Last year, China agreed to build two plants in Pakistan’s city of Karachi, supported by a loan of US$ 6.5 billion, and is in talks over a further three reactors. In November 2013, China and Romania signed an inter-governmental agreement through which CGNPC would invest in the construction of two new units at the existing Cernavoda site. Turkey’s government is keen to build nuclear power stations. Rosatom of Russian is constructing the first plant, a consortium from Japan and France has the contract for the second, whist the Chinese are positioning themselves for further projects. In South Africa, China’s companies are providing training for the national nuclear energy company at the same time as negotiating a deal which might involve as many as six reactors. In Latin America, Argentina and Brazil are two of the countries being targeted by China’s nuclear power companies.

This overseas expansion by China’s nuclear industry is part of a long-term trend for the country’s energy and resource companies to invest overseas which dates back to the early 1990s and is supported by government through financial and diplomatic support.

It goes without saying that China’s nuclear power companies will be judged on their safety performance, both at home and abroad, as well as on their ability to deliver projects to schedule and within budget.