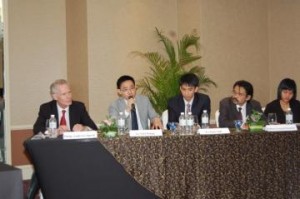 On 28th February 2014, ESI held a half-day conference to present the results of a project on unconventional gas

The shale gas revolution in the USA and the growing need for gas supplies have triggered a global search for unconventional gas, both shale gas and coal-bed methane. Many countries have good geological potential for large resources of unconventional gas, but it will be non-geological factors which will determine the rate at which this resource can be exploited.

In East Asia, sustained economic growth combined with environmental concerns is driving governments to introduce policies to support the exploitation of shale gas and coal-bed methane. Despite the geological potential that exists, a range of political, legal and economic factors may constrain the extent to which these ambitions will be fulfilled. The rate at which unconventional gas production rises in the region will determine the energy mix of individual countries, the level of pollution from coal mix, the scale of carbon emissions, and the gas trade.

In early 2013, ESI initiated a study on unconventional gas production in East Asia, focusing on China, Indonesia and Vietnam, to identify the non-geological, and non-technical constraints to unconventional gas production in this region. The project involves partner institutions from these three countries, namely, the Beijing Institute of Technology (China), China University of Mining and Technology – Beijing (China), the Indonesian Institute for Energy Economics (Indonesia), and the Vietnam Petroleum Institute (Vietnam).

The presentation slides are available at:

A press report is available at: