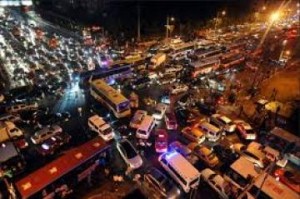 Like many rapidly industrialising countries, China’s cities face ongoing challenges relating to transport. Beijing has built a very impressive subway network over the last ten years, but congestion remains a serious problem and air quality remains stubbornly poor, despite a few clear days in September. This combination of congestion and pollution is economically wasteful, harmful to health and reduces the quality of life for citizens. The two key policy challenges relate to modes of transport and energy source.

Origins of the rapid growth of car ownership in China lie in policy decisions and non-decisions taken in 1980s and 1990s. In the 1980s, the government took steps to boost the quantity and quality of domestic vehicle production, in part through the establishment of joint ventures with foreign manufacturers. But, despite private ownership of vehicles being permitted since 1984, most new vehicles were for the commercial or government sectors. In 1994, the government announced a strategy which was intended to make the automobile industry of one a few ‘pillar’ industries to become competitive in international markets. This required that private car ownership be encouraged. As a consequence, not only did total vehicle production rise, but, more significantly, the proportion of saloon cars in the output of new vehicles expanded from about 8% in 1990 to over 60% today. Deliberate government policy and the individual aspirations of the newly affluent middle classes have thus converged.

Although Beijing’s subway network is now very extensive, its early growth was slow. The first 28 km was opened in 1981. Another 16 km was added in 1984. In the period 1991 to 2000, further extensions took the total to about 55 km, on just two lines. The suburban rail network remains very limited.

In contrast, the earlier development of transport networks in many Chinese cities was dominated by the construction of roads. Beijing, for example, has five multi-lane ring roads totalling some 500 km, mainly constructed between 1990 and 2009, and the city acts as a hub to nine expressways and eleven national highways. Each day a total of some 20,000 buses are out on the city’s roads, along some 500 routes. Meanwhile a combination of pollution, congestion and the use of cycle lanes by motor vehicles has reduced the proportion of Beijing’s population using bicycles from 80% thirty years ago, to less than 20% today. Walking is also becoming a less attractive option on account of the pollution and poor road lay-out. The recent surge in use of electric bicycles reflects a shift away from public transport rather than down-scaling from private cars.

Cities such as Beijing have brought in a variety of measures to constrain car use. These include auctions for car license plates, high fees for parking, bans for certain days of the week depending on the license plate number, as well as bicycle and car-ride sharing schemes. Despite these actions, the number of vehicles on Beijing’s roads rose from 4.7 million in 2010 to 5.4 million in 2013. Less than 50% of the population use public transport, compared to 85% in London.

The second challenge relates to energy source. The central government has steadily raised the fuel efficiency and emission standards required of new gasoline and diesel vehicles and these standards now lag only slightly behind those of the European Union. However, the oil companies have been slow to match these steps by upgrading their refineries to produce the required high quality fuels. Buses and taxis have been using compressed natural gas for several years on the grounds that it is less polluting than petroleum products. A more recent development has been the use of liquefied natural gas in road transport, especially in trucks and buses, largely on the ground of low cost. But the recent reform of gas pricing raises the possibility that the growth in the use of gas in the transport sector may stall.

The next alternative is the electric car. The central government has been trying for ten years to encourage Chinese manufacturers to move into this field and the world’s leading makers of electric vehicles are promoting their products in the country. Both central and local governments have been providing substantial subsidies to local manufactures, including joint ventures. But sales have been slow. About 20,400 electric and plug-in hybrid vehicles were sold in the first half of 2014, more than the in the whole of 2013, but a small fraction of the total of 18 million cars sold that year. Cost remains a constraint. In response, the central government announced in July that it would waive the 10% purchase tax for electric cars.

The major obstacle to the expansion of electric vehicles in China remains the shortage of public infrastructure for rapid charging of the batteries. Protectionism among local governments and unwillingness to invest on the part of the State Grid Company together have prevented the development of a nationally-standardised, rapid recharging network.

The government wants to have 500,000 electric vehicles on the road by 2015, up from 78,000 today, and 5 million by 2020. Even if these targets are met, more than 70% of the country’s electricity is still generated from coal. So, although the move to electric vehicles will reduce air pollution in the cities, pollution will still be emitted from the production of electricity but in other locations, albeit from increasingly efficient and clean thermal power stations.

There are no easy answers and the policy direction is far from clear.